The capacity depends on the internal flow area and on the working pressure.
In general the relationship between the capacity and the pressure is the following:

Q1 and P1 are known capacity and pressure. Q2 is the resulting capacity at desired pressure P2. All the tables of the catalog are based on water.

For liquid with a specific gravity other than 1 multiply the catalog water capacity by the following conversion:

It is available a wide range of nozzles suitable to solve every kind of your spray problems. So you can choose different spray patterns, and precisely:

The spray angle is generally measured near the orifice. By increasing this distance, the measurement of the width of the jet becomes less precise due to the effect of gravity and environmental conditions. It should also be noted that an increase in the viscosity of the product to be sprayed reduces the spray angle.

The tables show the theoretical coverage at various distances, depending on the spray angles. 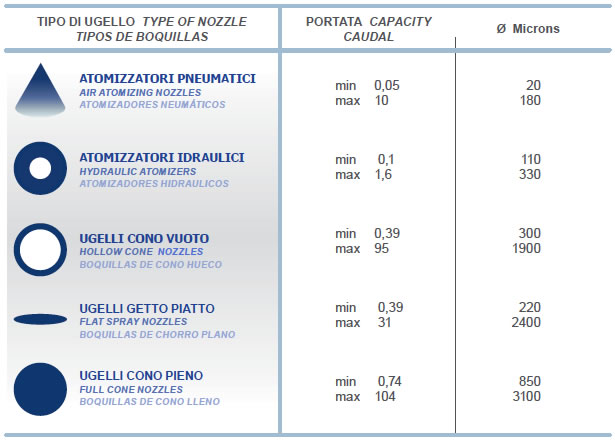 The spray impact depends on capacity, pressure and spray pattern. The highest impact is produced by solid stream and flat spray, the lowest one by wide full and hollow cone.

The wear effect produced on the nozzle orifice determines an increase of capacity. Under the same conditions, stainless steel life is five times longer than brass.

The standard material of our product is indicated on the table 1.
Eurospray may also supply the nozzles even with non-standard material according to the customer’s request.
EUROSPRAY’s products are identified by 11 alphanumeric characters.

NB: The material for high pressure nozzles MC4-C4 and HP is not listed, so the article code starts with the thread or the model (Example: C4-020 – 1HP022)

* Only for flat jet